The Journal of Light Construction article is finally out. It's in the December issue, which is just coming out now. 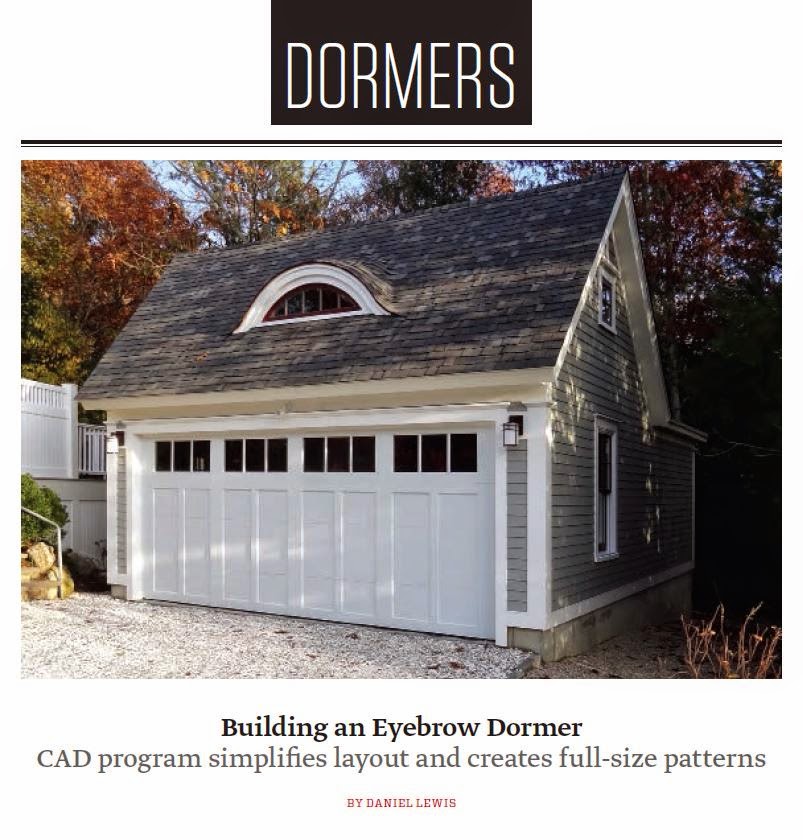 I was hoping that it would make the cover, but they decided to put a photo of floor tile installation there instead. Here's the link.
JLC - Building an Eyebrow Dormer
There's more info if you follow the link at the bottom of my website.
Posted by Daniel Lewis AIA at 12:28 PM No comments:

It turns out that Google Street View has been at it again. They're cruising the streets of Centerville yet again, just a few months after their most recent passes. This time around, the garage is essentially done. 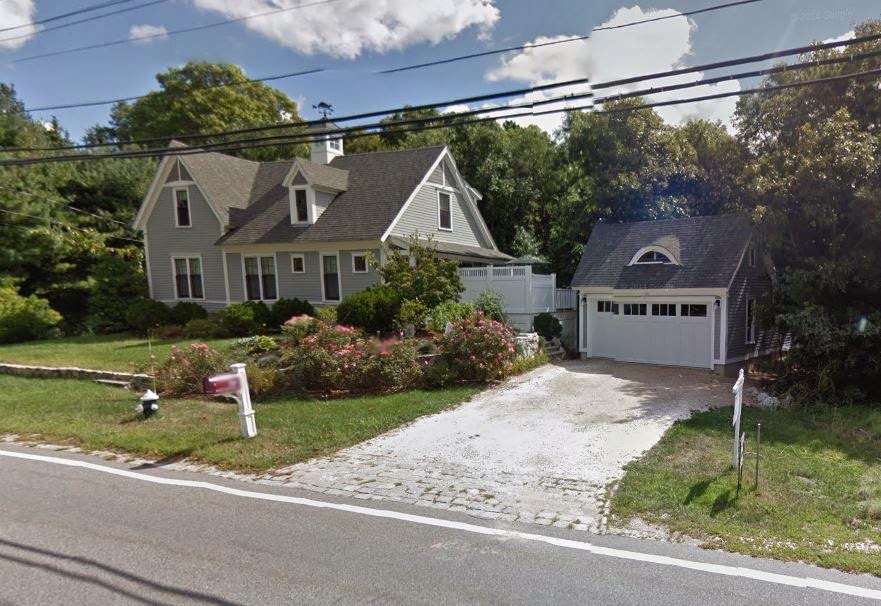 If you look closely, you can see that one of the muntins in the garage door has fallen out, so Google must have come by soon after the garage door was installed. The installer came right out to fix it, so it wasn't long, but to me it's kind of like seeing a tooth missing.

Here's the previous view from the Our Lady of Victory church exit. 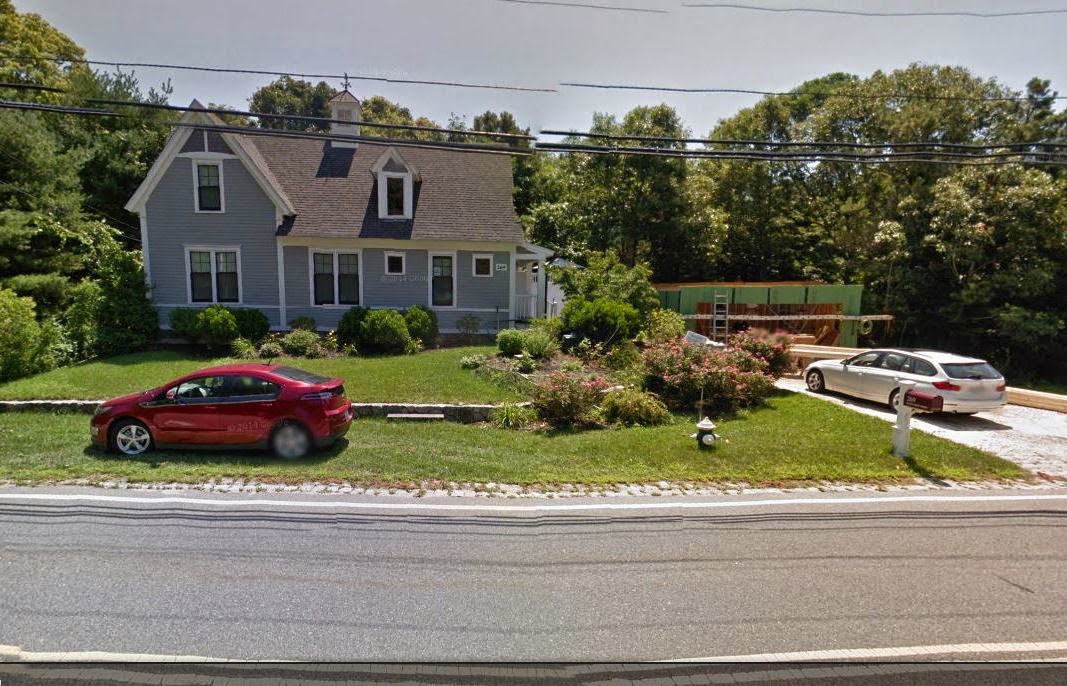 And then here's the new view, only a few feet from where the previous one was taken. 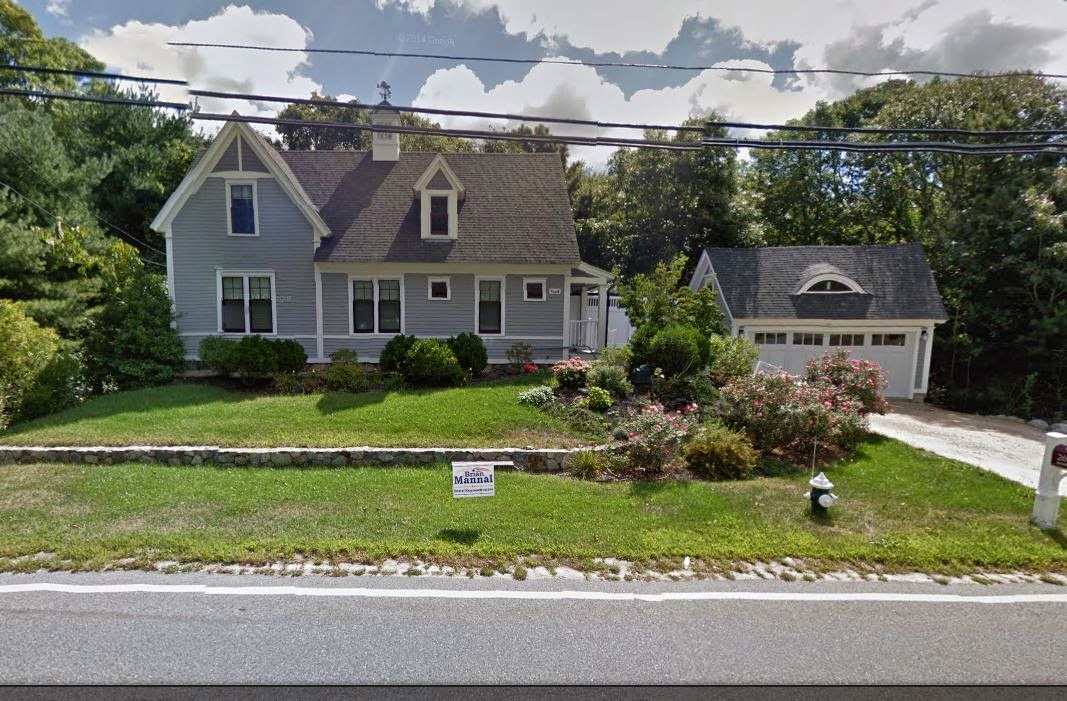 
Posted by Daniel Lewis AIA at 7:47 AM No comments:

Until recently, our house wasn't on Street View. The images must have been from early in 2009 before any construction had begun. Now it turns out that Google has caught the construction progress of the garage over a series of a few days.

﻿
Mike Dangelo and his crew weren't there, but Chris Pare was installing the new dog fence wire.

We were both outside as the Google cameras came by. Chris had found an old manhole structure which we had guessed was used at one point for irrigation of the old cranberry bog.

This time it was a sunny day and Dangelo was back. This is a view from the Our Lady of Victory exit drive. They only went part way up the hill, but from a little higher up you can see both sides of the garage at once.

Day 3
Finally, in this view from Church Hill Road, you can see that they're putting the rafters up.

Posted by Daniel Lewis AIA at 8:22 PM No comments:

I thought that an eyebrow dormer would fit in with the architecture of the house and garage quite well, so I started a little internet research to see how people had built them in the past. Most of the processes involved pencils and strings to make the radius curves, and often they were built on the ground and lifted into place once everything was test fit. There were many ways of framing them, some with rafters perpendicular to the front face and some with ribs. I decided that ribs would be the easier way to go, and since laminated veneer lumber, also known as LVL or the trade name Microllam, is available in large sizes, I utilized a piece of 1 3/4" x 24" x 12' LVL to form the ribs. Rather than the labor intensive pencil and string method, I opted for a 3D CAD model which I then turned into full size paper patterns like this. 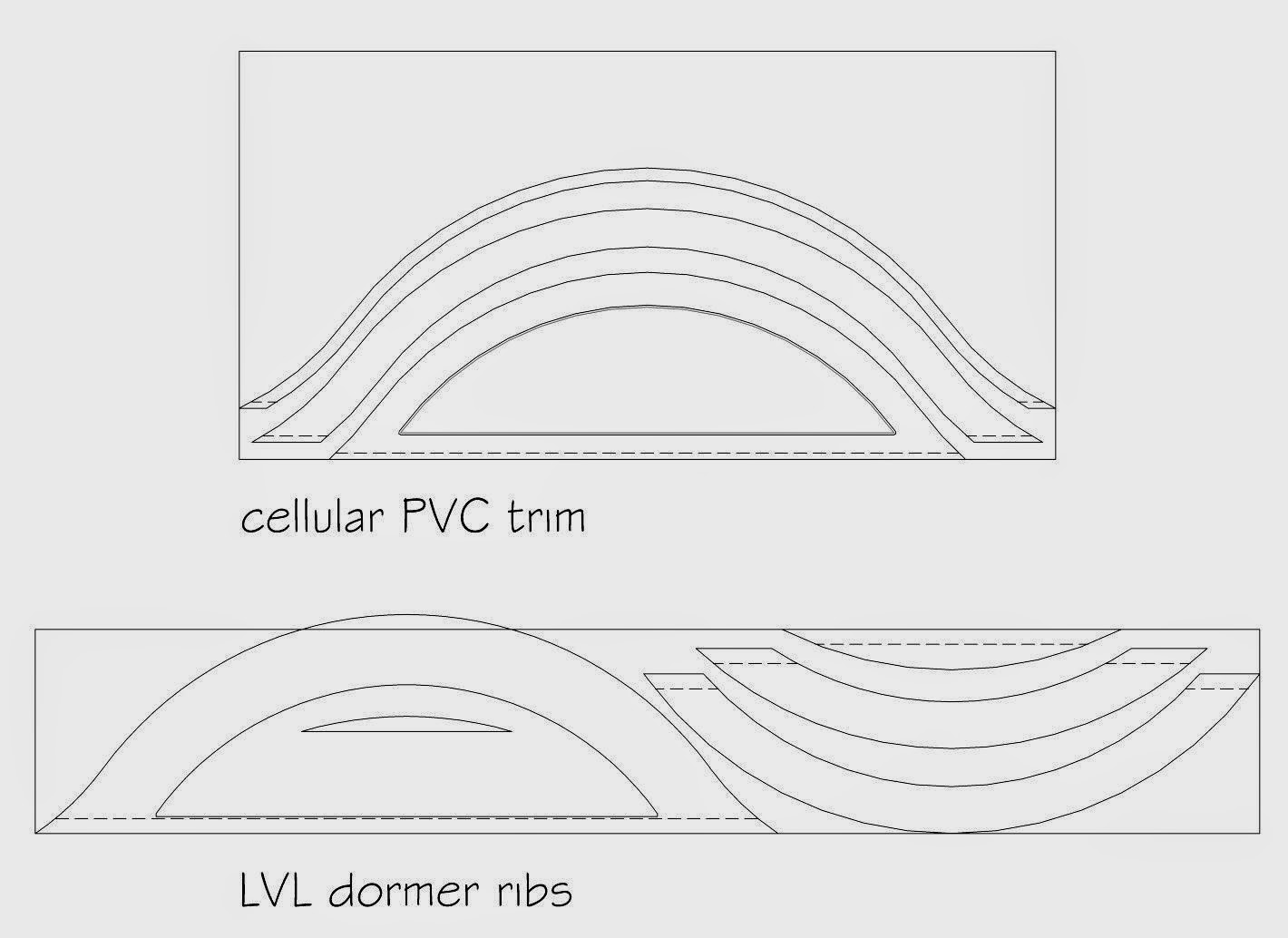 The exterior trim is cut from a sheet of Azek cellular PVC. I had based the size of the dormer assuming a 4'x8' sheet of Azek, but later found that the local lumber yard stocks it in 4'x10' sheets and it would actually have cost more to special order the 4'x8' piece. I might have flared the ends a little more knowing that. I even laid out the patterns for the double 1/4" plywood sheathing using slightly larger top pieces to compensate for the plywood thickness. 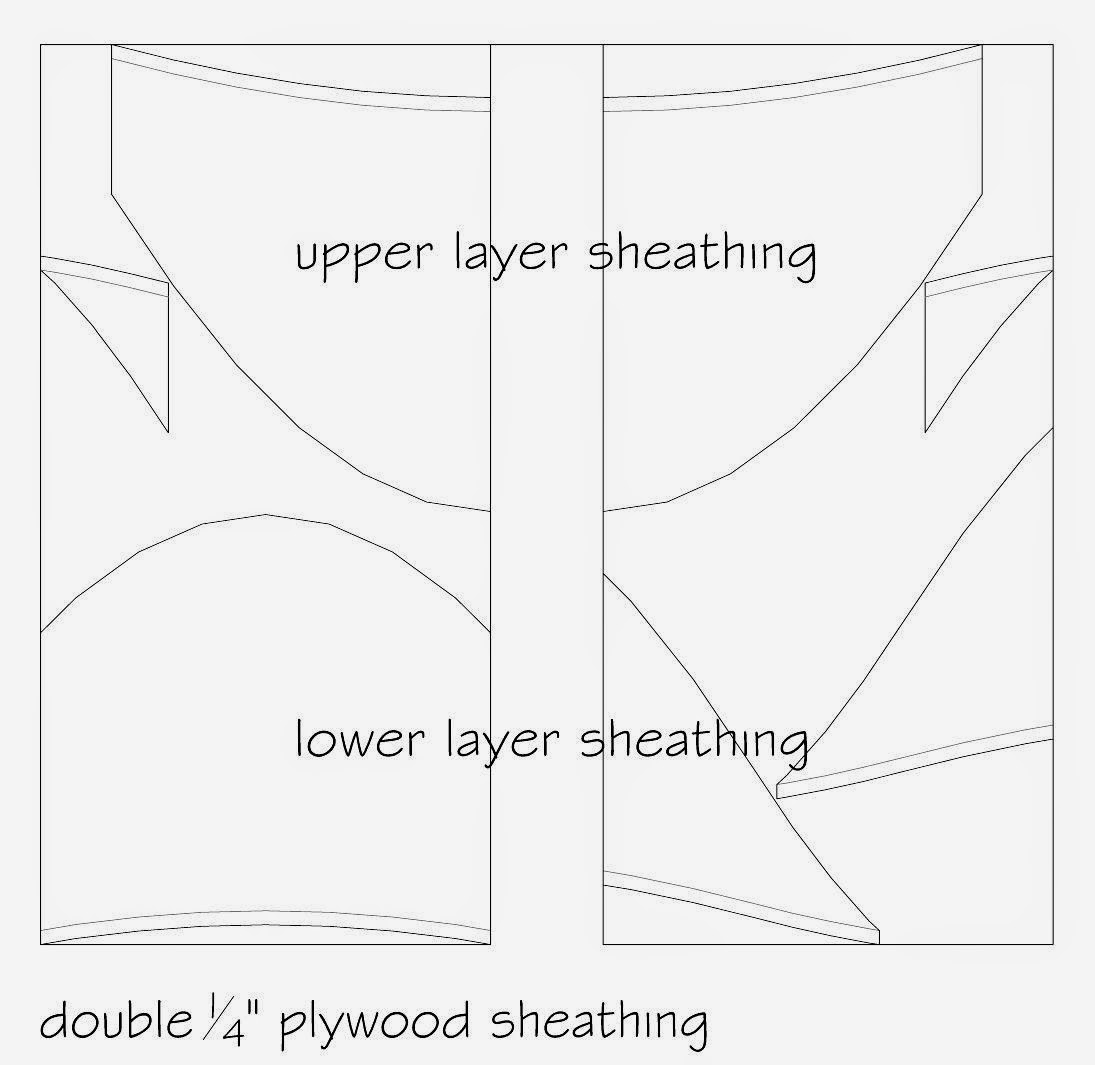 Here it is with the ribs going into place. 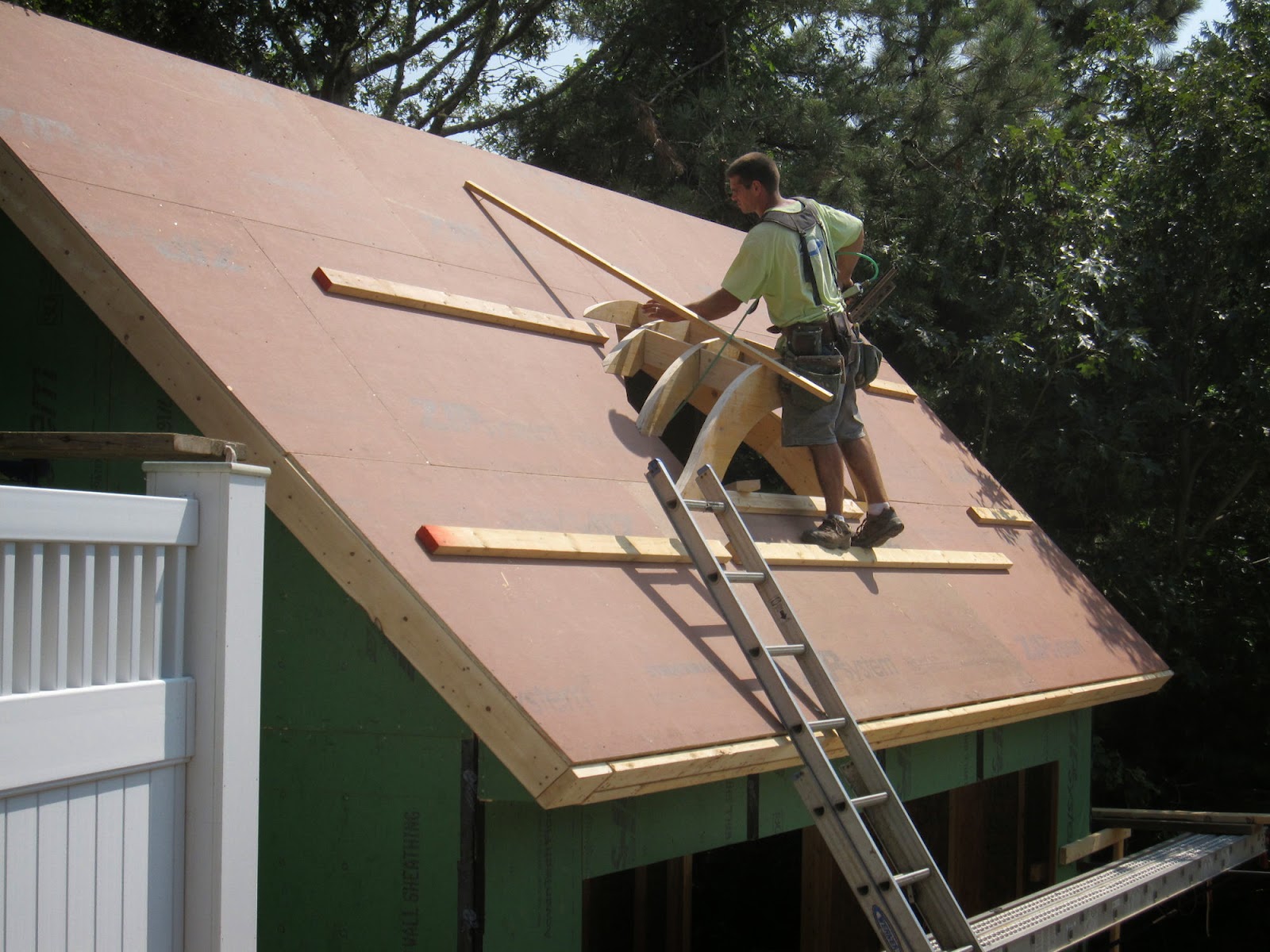 This is what it looks like from the inside. 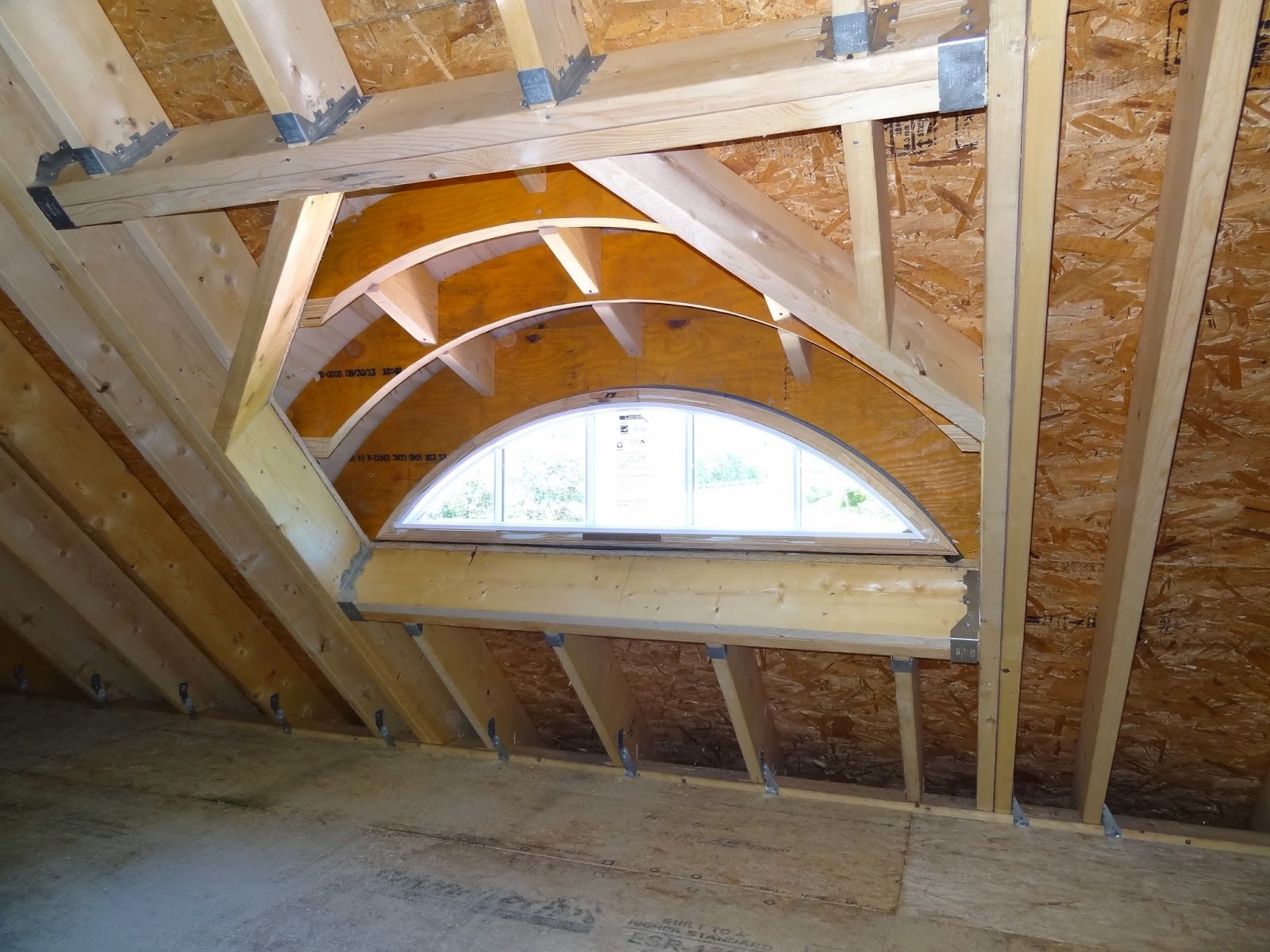 And here's the outside with the shingles and trim installed. 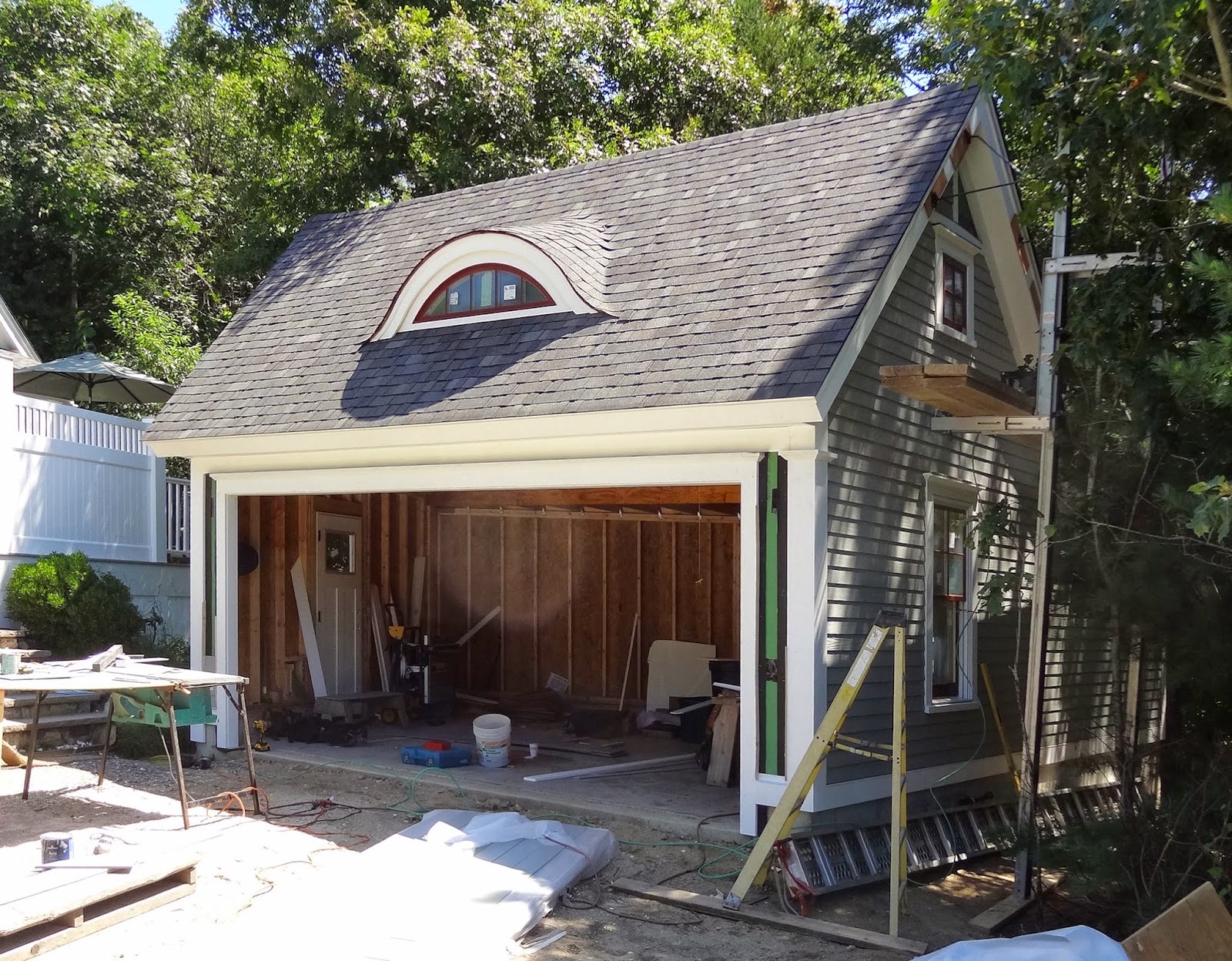 The gable roof is only about 14' deep and there is a triangular flat roof in back which is hidden from sight. Even though the garage is a trapezoidal shape, it looks almost rectangular from most viewpoints.
Posted by Daniel Lewis AIA at 9:52 AM 1 comment:

When we built the house, we had maxed out the buildable portion of the lot and figured a garage would probably never be possible. However, about a year ago I looked into the wetland regulations and found out that there were provisions on constrained lots where one could gain permission to essentially purchase back the right to use a portion of your own land. Our wetland consultant wasn't certain we could gain approval, but it was certainly worth a try.

I prepared two schemes, Option A which was the desired plan, and Option B, which was my fallback option. Option A was a small rectangular two car garage. 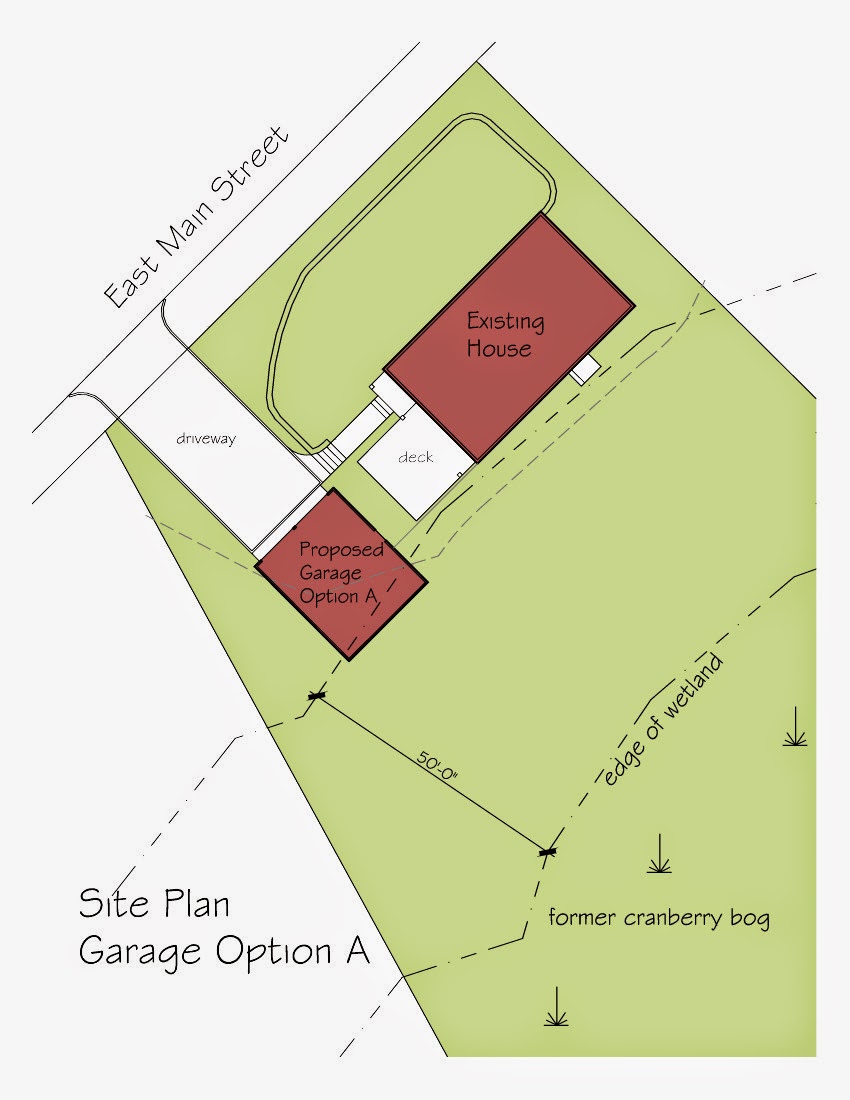 And Option B was a trapezoid. 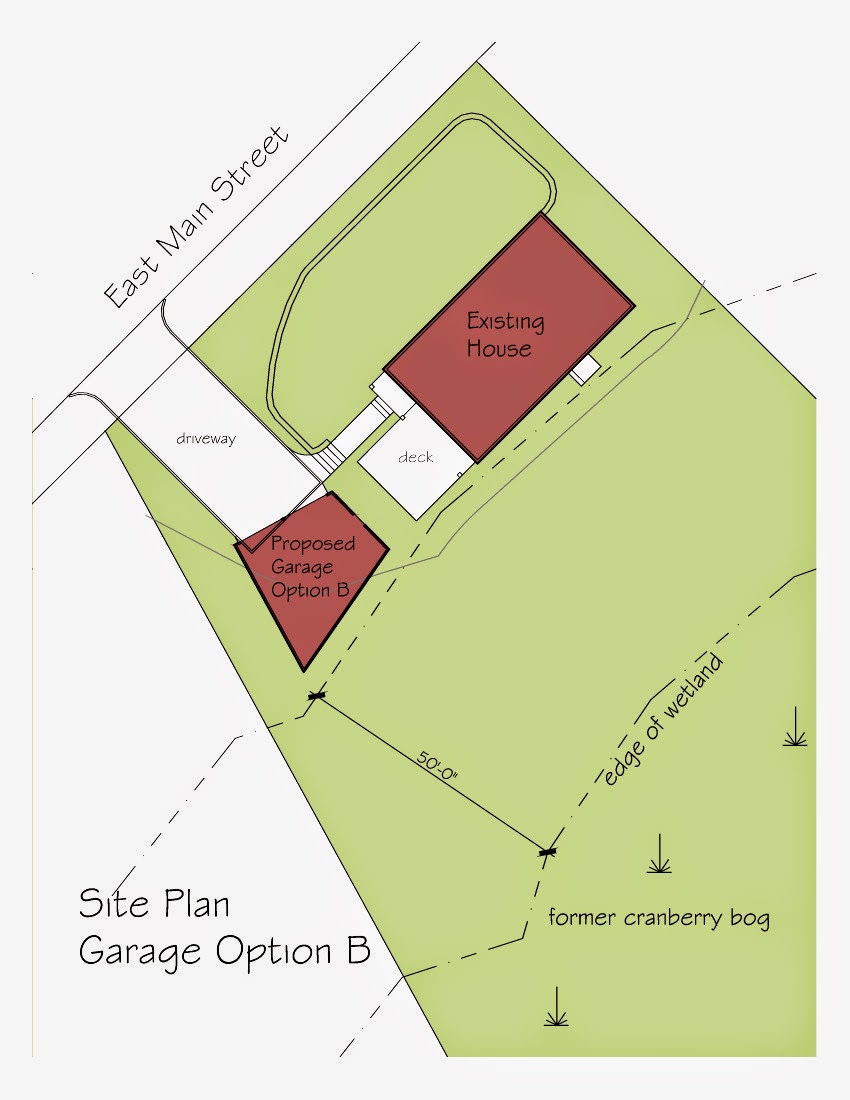 However, the Conservation Commission was very much against allowing the disturbance of anything within 50' of the former cranberry bog and wetland, but gave approval for Option B. This was last October. Now I have some catching up to do on the blog posts.
It's an odd shape and makes the construction a little more difficult, but is certainly much better than no garage at all. The rear of it follows the wetland buffer boundary, the left side parallels the house and deck, and the right side parallels the lot sideline. Here's what the garage will look like. 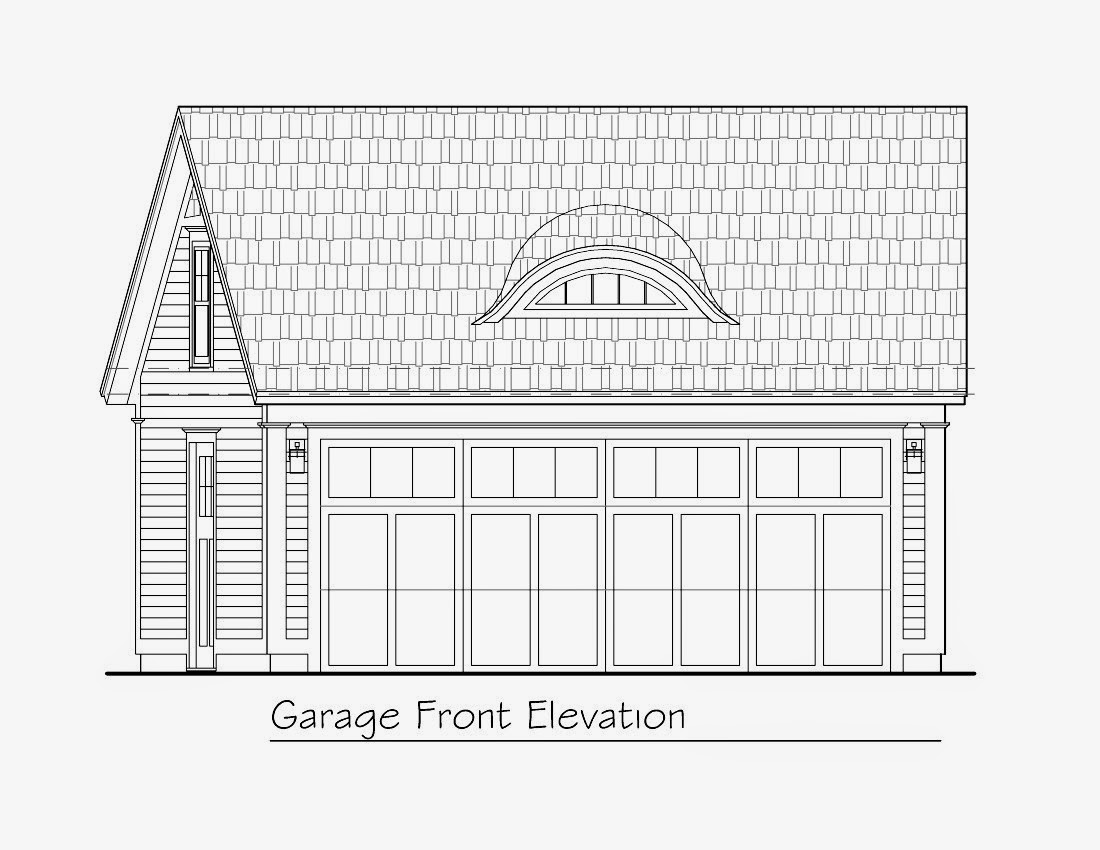 The view from the street will look pretty normal, but if you stand back far enough, you will see both sides of the garage at once, giving just a bit of a fun house effect.
Posted by Daniel Lewis AIA at 9:24 PM No comments:

It's a BRICC House

Last Thurday I received a pleasant surprise. I had entered the house in the Home Builders & Remodelers Association of Cape Cod BRICC (Building & Remodeling Industry on Cape Cod) Awards competition and ended up winning the Best Single Family Home under 2500 SF. Here's the certificate and nifty etched glass brick. 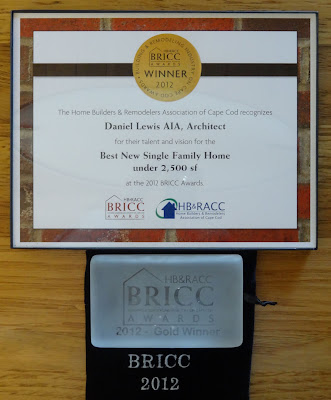 The BRICC brick is pretty cool and I had to work to get a good photo. I tried a few different approaches, but the best one came from resting it on the black velveteen bag with the sun shining through. Then I stood back about ten feet and used a little fill flash to bring out the foreground. 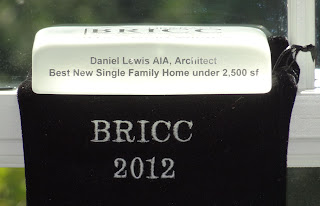 This was the first time the HBRACC held the competition and they won't hold another one until 2014 so I'm glad to have received this one the first time around.
Posted by Daniel Lewis AIA at 8:25 PM No comments:

Although I haven't added any new posts in quite a while, the blog still seems to be generating interest. I signed up with Histats a couple of years ago and it's interesting to see how and why people get here. Google Analytics has similar features but the illustrations from Histats are a little more dramatic. 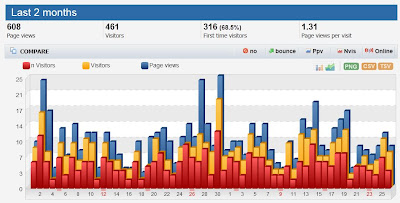 This chart shows the stats for September. There seem to be a good number of new and repeat visitors every day. It turns out that there's more activity now than there was back when I was regularly adding posts. 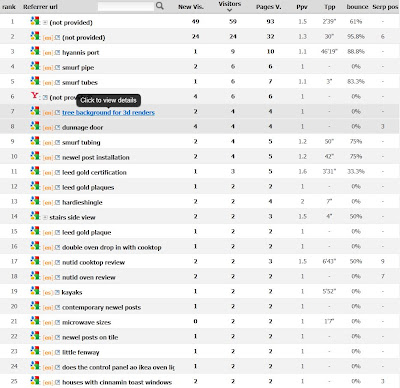 And this is an indication of how people find the blog. Some access it directly or from a link on my website but most people seem find it from internet searches. There was an interesting bump when the Smurf movie came out due to smurf related searches, but now the smurf hits are primarily from people looking for smurftube info. 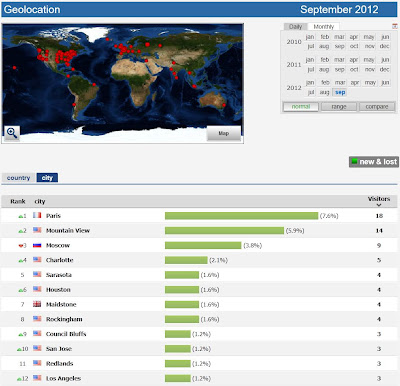 And the visitors come from all over the world too.

Posted by Daniel Lewis AIA at 8:01 PM No comments: