What would an architect design for himself (or herself) given a blank canvas?  I have to qualify the blank canvas part.  What I mean is, given a 24' x 40' blank canvas - and that was after going back to the Conservation Commission to enlarge the 24' x 38' footprint I had inherited.

Usually I prefer to use the exterior of a building to define outdoor spaces with a figure/ground kind of relationship.  This is also a way to delineate the various uses or parts of a building, and it usually creates a more interesting form.  In this case, though, there was little choice but to work within the box.

My wife really wanted a more Wrightian kind of look.  Given that we had to work within the box, that would be rather difficult.  Also, the heart of Centerville is a very New England Village type of place.  Wright was able to sometimes make the unconventional fit in, ala Guggenheim, but it's quite a challenge to do it right.

From a functional standpoint, we wanted the First Floor to contain all of the main day-to-day functions so they would be all on one level. Even within the enlarged footprint, space is at a premium.  It's kind of a forced economy, though, as there would be little room for wasted space.  Although the footprint is limited, there is a Foyer so that the door doesn’t open directly into the living areas, along with a small adjacent Powder Room. 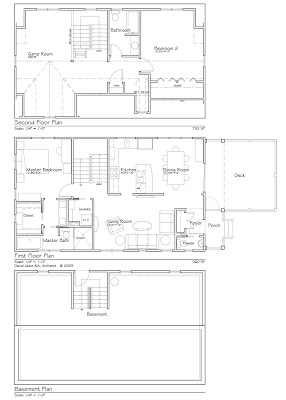 The Kitchen and Dining Room flow into each other to facilitate gathering. The Kitchen has a peninsula bar with room for stools and an upper cabinet with glass doors on both sides for access to dishes and glassware. There is a prep sink at the window, near the refrigerator, range and microwave, allowing a continuous prep and work area. The Dining Room has an opening large enough so that the table can be extended further into the adjacent space for larger groups. A triple window overlooking the backyard and a sliding glass door to the deck provide plenty of light. The Deck, due to site constraints, has to be to the side of the house and has a lattice topped partial screen to provide some privacy from the street. It will have an outdoor shower for washing off sand after the beach and such, and has a gate which opens to the Porch for direct access to the yard.

Often Living Rooms or Family Rooms aren’t really planned for the furniture they will contain, creating problems down the road. The Living Room, although not overly large, has the walls, windows and openings in the right places to provide for the functions within.  There is a spot on the end wall for a fireplace and future built-ins, and an opening in the ceiling allows light from the dormer above.

The Laundry Room is centrally located and has space for shelving and storage, also acting as the de facto linen closet. The Master Bedroom is large enough to also have a place for a desk and computer. Small rectangular hinged awning windows above the bed add light and ventilation. The vanity with double sinks is separate from the Master Bath with its jetted tub and large curbless shower.

The Second Floor has a large open multi-purpose room, the second Bathroom and a large Bedroom. The ladder near the stairs provides access to a small roof deck. Since the trees will remain close to the house, the back of the house will most often be in the shade. This will provide a nice sunny spot. Although it faces the ocean, it’s doubtful we’ll have an ocean view. We walked up the hill at the church across the street to a similar elevation and couldn’t see the ocean. However, in the winter when the leaves drop, we’re hoping there may be a glimpse.

The Basement is full height only in the rear portion. The front half has a raised slab due to the distance to the septic system, but we will locate the furnace there to keep the Basement as open as possible. The back of the basement is about 2/3 above grade, so we can fit in some full size windows even though this is primarily a storage space.
Posted by Daniel Lewis AIA at 8:48 AM